A magnificent view of Suzdal opens from the bank of the Kamenka. The panorama of bell-towers and cupolas of innumerable churches with tops of trees showing here and there unfolds in a continuous row stretching as far the eye can see. One of the oldest towns in north-east Russia, in the 11th century Suzdal was the capital of the Rostov-Suzdal Principality. When the centre of political life was trans¬ferred to Vladimir, Suzdal could no longer play the role it had played in the earlier years. In the 14th century its lands were annexed by Moscow and it was reduced to the position of an ordinary district centre in the Moscow state. The importance of Suzdal lies primarily in its being a guardian of old traditions, a town-museum possessing many excellent architectural monuments, with chronology ranging from the 13th to the 18th century. 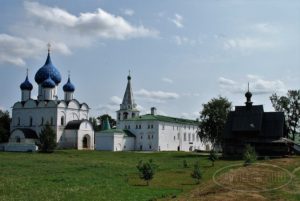 The place from which the town had started is now the territory of the Kremlin. It was here that Prince Vladimir Monomachus erected a cathedral which stood from the late 11th century to the beginning of the 13th century.
In 1222—1225, Prince Georgi Vsevolodovich built a new church on the same site—the Cathedral of the Nativity of the Virgin. It has survived till our time, though not intact. In the early 16th century, the walls were dismantled in their upper part and then rebuilt. In the 18th century the cathedral was given onion-shaped domes. The outer decor mainly consists of details hewn in white limestone.
Among specimens of ancient Russian art gathered in the cathedral there is a unique masterpiece of 13th century craftsmen—the “Golden” Gates in the west and south portals. The huge two-leaved doors have the facing of copper plates decorated with numerous scenes. The pictures with exquisite golden lines gleaming against a dark background are remarkable for the elegance of draftsmanship. Originally the church was frescoed in 1233. The existing murals were first executed in 1635—1636 and then repainted in the 18th and 19th centuries.

Convent of the Intercession

None of the wooden houses that were built when the town began to grow in the 14th and 15th centuries has survived the tempests of time. The 16th century was marked by a stone construction boom in the monasteries.
From the higher left bank of the Kamenka there is an excellent view of the Convent of the Intercession whose main buildings—the Holy Gates, the Church of the Annunciation and the Cathedral of the Intercession—were erected in the first two decades of the 16th century by commission of Grand Prince Vasily III.

Large-scale construction works at the convent were carried on till the mid-16th century. Among the buildings dating from that period are the Church of the Immaculate Conception, the bell-tower of original design, the walls, and the towers. Alterations and additions were also made in the 17th and 18th centuries.

Facing the Convent of the Intercession from the higher left bank of the Kamenka are the walls and towers of the St Euthymus Monastery of the Saviour. The heavy domes of the monastery cathedral tower behind the walls. The severe aspect of this complex is effectively set off by the gay white buildings of the convent. Founded in the mid-14th century, the monastery served as Suzdal’s north¬ern defensive outpost. The existing walls and towers were raised in the 1670s and 1680s and have a design vary-ing according to their location—in some places they are made lower, in others—higher. The monastery fortifications rank with the best examples of Russian military architecture.
In the group of buildings situated inside the walls the most impressive is the five-domed Cathedral of the Transfiguration (1564) with the interior frescoed in 1689 by the famous team of Gury Nikitin and Sila Savin.

At the Convent of the Deposition of the Robe the main buildings date back to the 16th or the 17th century. The cathedral represents a smaller and somewhat simpli¬fied version of the cathedral in the Convent of the Inter¬cession. Architecture of the second half of the 17th century is exemplified by the magnificent Holy Gates topped with two richly decorated pyramidal towers.

The 18th century witnessed a new flowering of Suzdalian architecture. To that period belong some of the town’s best buildings: the Church of St Nicholas, the Church of Sts Cosmas and Damien, the Church of the Entry into Jerusalem, the Church of SteParasceve Piatnitsa, etc. They have some common traits in their construction—a cubic main body that is crowned with one or five small beady cupolas resting on thin drums; a multitiered belfry with a tent-shaped upper part. Their peculiar silhouettes lend a specific quality to the architectural ensemble of the town.

At the village of Kideksha, a few miles from Suzdal, Prince Yury Dolgoruky had a fortified residence. The memory of that time is kept by the Church of St Boris and St Gleb (1152).

For immersion in the Russian tale take a Suzdal tour or Golden Ring tours from Moscow with a professional guide in a comfortable car.